Adapting Books For Children With CVI At All 3 Phases 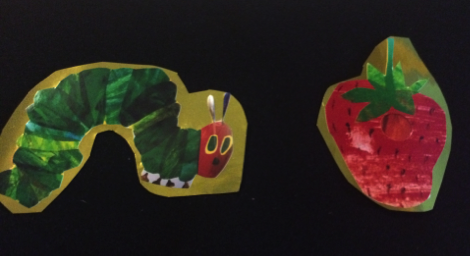 For my Cortical Visual Impairment mentor training we were assigned to adapt a book for all three phases of CVI. I chose The Very Hungry Caterpillar because I have several classes reading this book through the end of the school year. I wanted to adapt something that could actually be used with my students. The two classes with Phase I, II, and III students are both self-contained moderate/severe or severe/profound classrooms.

For a low phase I child you can do one of three things (remember to focus on only one sense at a time with a CVI child!). Dr. Roman-Lantzy recommended using shiny/mylar paper in the colors of the fruits and presenting them one at a time to the student and stating that “an apple is red” or “an orange is orange” and so on. This paper is readily available and can be found inexpensively at the Dollar Tree. You can use sheets found in the craft section, wrapping paper, “tissue” paper, or even gift bags. Begin by using real objects, such as real fruits and vegetables.  Allow the child to explore these tactually and visually, perhaps to taste them, cook with them, etc., so that the items have meaning. They could also either utilize another single sense during story time, either by only tactually exploring the object or listening to the objects salient features described. For this purpose, I located real-like 3-D objects to represent each of the items from the book. In the early stages of Phase I, these will be too difficult for the child as they will be not be able to visually attend to more than one or two single solid preferred colors and multi-colored objects will be too complex. Begin with the objects that are single color and in their preferred color such as the strawberry or caterpillar. As they begin to recognize additional colors, you could begin to incorporate more of the 3D representations. Each will be presented against a solid black background with light shown on them or by putting them on a light box in a lower lit room.

You would continue to use the 3D objects in the beginning of Phase II until the child has resolved to the stage that they are ready to view 2D materials. I took photographs of each of the 3D objects so the student could begin to match the 3D object to a 2D photograph of the object. 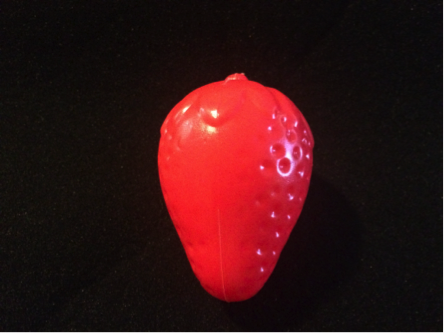 These could also be viewed on an iPad to take advantage of the backlight if needed. I then took photographs of the items from the book, cut them out and bordered them with mylar paper. They can then begin to connect the 3D object to the 2D illustration from the actual book. I put a mylar border around each to draw their visual attention to the picture. The teachers will talk about the salient features that are common between the 3D and the 2D illustrations from the books. At this point the teacher would want to talk about additional salient features that the 3D objects might not have had, like the legs, eyes and antenna on the caterpillar or the green stem on the strawberry. I created a book out of black card stock, the photographs of the books illustrations and written words. Since the class this student is in is a moderate/severe class, I chose one significant word from each page of the book. I then highlighted the words with red marker. There is one picture and one word on each page of the book. Dr. Roman-Lantzy reminded us that when outlining words to make sure the outline is clean and tight around the word. She also recommended teaching the child to match the empty outline of a word to the actual word. I also laminated the book and bound it. The student the book is for can be rough with materials and likes to put them in her mouth. The classroom teacher requested it be laminated, but Dr. Roman-Lantzy also reminded us to be careful of lamination due to the glare. I’ve had this issue in the past and have found that using contact paper as opposed to lamination reduces glare, but this can be harder and more time consuming. Just decide what is best to do depending on the child and environment the book will be used in. I then made black card stock “windows” of differing sizes to be able to block out the rest of the page and focus in on one illustration. The teacher would begin by using only the adapted book and then begin to incorporate transitioning to the actual book using the window to show the student where the item is on the page. This would hopefully help them learn to locate the item on the original page. Again, be careful of glare if laminating materials.