A Brief History of TACK-TILES® and Braille Legos

A history of TACK-TILES® braille Lego blocks, which were designed and patented by a parent 25 years before Lego announced the development their product. 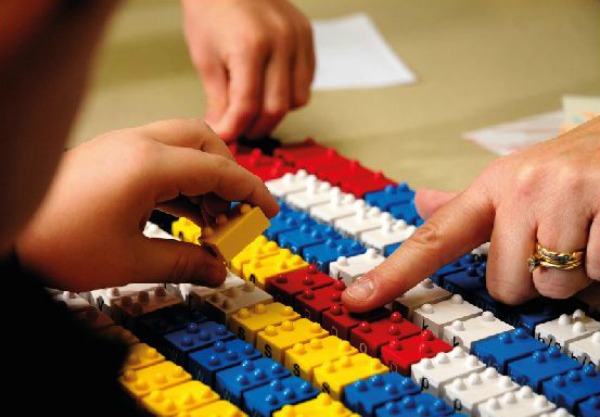 Recently there has been a large amount of publicity about the development of Lego Braille Bricks.  While we applaud anything that promotes braille literacy, we also wanted to be sure that people are aware that Kevin Murphy created TACK-TILES® decades before this product was announced by Lego.  We want to help spread the word that Lego Braille Bricks are his invention and creation.  He surely deserves credit for the development of these well-respected braille teaching materials.

Mr. Murphy is the father of a boy (also named Kevin) who is blind with additional disabilities.  Their story is reprinted here with permission.

A Parent’s Late-Coming to Braille

Fourteen, blind since infancy, multiply handicapped, Kevin knew about letters. Letters excited him in the way angels, UFOs, ghosts, and monsters excite many of us — lots of mystery, little practical value. His favorite television programs, Sesame Street and The Electric Company mimicked Madison Avenue’s technique of manipulating human want. Kevin wanted to read. For this child, reading had to mean braille. Yet by 1981 “Braille” for Kevin, was a mispronunciation of “fail.” Preceded by dread, overshadowed by fear, each class was cursed by confusion, each ended in depression.  Ending six years of effort, Kevin’s teachers abandoned efforts to teach braille to him. I believed that braille was beyond Kevin’s grasp. Yet, a distant part of me raged against that illiterate life. Inwardly I hesitated to post full cost and cause to Kevin’s account.

Kevin — and Heather, my adopted daughter — were multiply handicapped and blind. No fear, nor excessive concern about blindness gripped me. My children were who they were, I saw nothing in need of fixing — except, perhaps, in the society that shunned them. I nursed a parent’s terror of braille, a thing so exotic, so beyond my experience, that surely my ignorance of it can only damage my child. But what harm could I do now? Kevin’s legacy of braille’s letters, alphabets, grief, effort, and failure were now discarded as junk. I could do no harm.

Kevin could, at least, learn that symbolic languages exist, function. He might not read a book, but he might understand how others do that. Many who’ve never piloted aircraft understand their workings. I searched for means such that Kevin might keep what literacy he had, perhaps to re-shape that knowledge base a bit to make life less confusing to him.

The approach: “Hey Kevin, want to work with Dad?” is not a proven winner with fourteen-year-olds.

“Hey Kevin, want to work on Braille?” was a certain loser in that age.

I mutilated Christmas toys, fashioned my first TACK-TILES®.  Little building blocks became braille cells. “Hey Kevin, guess what I did to your Lego® blocks!” was as perfect a “come on” as any ever devised. I let his very annoyed half-wondering fingers survey the damage thoroughly before accounting for myself -or mentioning B—–.  Then we built words and sentences on toy boards meant to serve as front lawns. I was poorly prepared for the success of early sessions with Kevin and TACK-TILES®. In that setting, failure meant only that I would deny him his great pleasure of confiscating my TACK-TILES®, forfeiting opportunity to lodge them onto his own board. 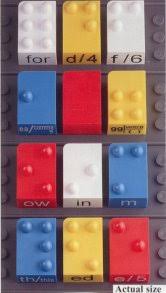 Here braille’s challenge was a benign contest of human beings, fun, much more to his comfort and liking. Braille was lodged in a world of his own — less like the adult’s. He allowed me to tease and fence with him around his knowledge and ability to use this new learning tool. He revealed secrets about his unique learning style, remained at task until I wondered if I had an attention disorder. Kevin’s instructor — his father — had not the beginning of an idea how to proceed. That helped immensely. Kevin and the TACK-TILES® took complete charge. Success, followed success in the wake of success. His teachers’s earlier efforts finally bore fruit. Kevin was able to read his grade one braille papers by the end of that month.

How Do Tack-Tiles Promote Braille Literacy?