“The Little Old Lady Who Was Not Afraid of Anything”: Accessible Ideas for Children with Multiple Disabilities

Ideas to make "The Little Old Lady Who Was Not Afraid of Anything" accessible to students who are blind or visually impaired, including those with multiple disabilities We are sharing them on Paths to Literacy and hope that others will use them!  Please add your comments at the bottom of the page. This project is based on The Little Old Lady Who Was Not Afraid of Anything  by Linda Williams.

The book I chose for this assignment was The Little Old Lady Who Was Not Afraid of Anything, by author Linda Williams and illustrator Megan Lloyd. This book and activities are for comprehension and sequencing and should be done in the fall, close to Halloween. By implementing the lesson at this time the students would better understand the concepts in the story and get to enjoy the use of real pumpkins and scarecrows. I chose the symbols according to what the old lady was doing or who she was meeting in the story, and also to teach sequencing. What she was doing in the forest was gathering herbs and nuts. I would teach what a forest is, and note that commonly we call them woods. We would review what she met first, second, and so on. I also chose the emotion afraid (or scared) because this is how she felt by the time the story climaxed.
The students will have background knowledge of the clothing items, shirt, pants, and etc. They will also have some background of nuts, such as peanuts, but I wanted to introduce the nuts I found in my yard, such as acorns and hickory nuts.
I also wanted to build on the student’s knowledge, such as knowing that forest and woods are the same thing. Have they ever been to a forest or woods? Are they familiar with herbs? Do they know what some herbs smell like or what they are used for, such as cooking?  Do they know what a scarecrow is used for or how to make one?  Each symbol plays an important role in the story and so many other fun activities can be add, like making a scarecrow.
I would recommend this story for all students because it is fun for the reader and students because of its possible physical elements. This book is also a valuable teaching opportunity as it includes familiar items to build a student’s interest and possibly unfamiliar items that will excite the student’s curiosity. This story is very auditory based and can implement tactile objects exceptionally well. With the inclusion of audio and touch this story becomes very inclusive to students who are visually impaired, as well as to students with multiple disabilities.

This book worked out great for a story box because the tactile objects are realistic representations of the items that the old lady met in the book. To store the story box items I chose a basket, because the little old lady carries her basket in the forest to gather herbs and nuts. The items I used are a pumpkin sticker with the texture of the exterior of a real pumpkin. The gloves are represented by 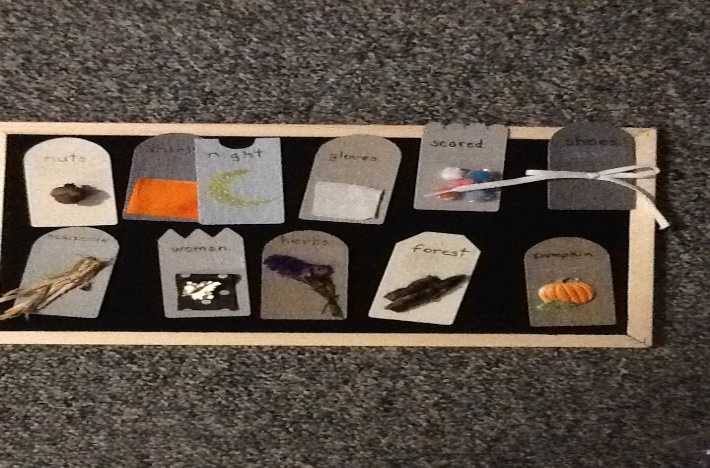 a small piece of material that feels like gloves kids would wear.  The moon symbol is made of tactile paper with bumps because it reminds me of the craters on the moon. The straw is actual straw so the student can learn the texture and smell. The shoelace represents the shoes in the story because shoes have to be tied. The tree bark represents the forest so the student will know what a tree’s trunk will feel like. The nut represents the nuts that are found in the forest or in their yards. The herb is lavender. The lavender is not only to be felt, but smelled too. The shirt is represented by a piece of material from a dress shirt, so it is different feel from the gloves. The old lady is represented by a ribbon from her hat that she tied under her chin. The emotion scared is represented by little sticky pom-poms because it feels like the hairs on your arms standing up when you have goosebumps.
I chose these tactile communication symbols so the students can use their senses of touch and smell to go along with the story. You can let them clomp the shoes, wiggle the shirt, and shake the pants. You can also have the students smell the herbs, pumpkins, and straw for the scarecrow. I would use the sticky pom-poms at the climax of the story to show that the old lady is scared. I also used vinyl siding samples from Lowes and cut the tops to represent the categories from the tactile graphic kit.

I chose the picture symbols because students are familiar with these items which include clothes, a chair, a pumpkin, nuts, and a basket. I also chose a couple they may not be familiar with, such as herbs and a forest. In rural areas most people do not use the word “forest”, but rather the term “woods”.  ThereforeI would be introducing new vocabulary words.